Vincent Subilia new Member of the Board 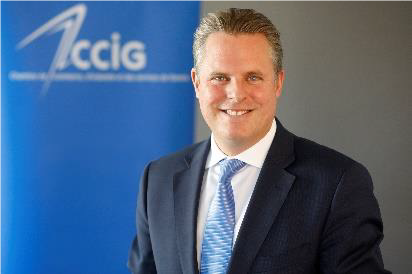 The Board of ICC Switzerland has elected Vincent Subilia, Member of the board.

As Director General of the Geneva Chamber of Commerce (CCIG), Vincent Subilia strives for a lively and diversified business community in Geneva. In so doing, he promotes the approx. 2’500 corporate Members which make the CCIG community. He also represents the CCIG within numerous regional, national and international institutions, including the General Council of the World Chamber’s Federation, as elected Swiss representative. Vincent has also acted as President of the Swiss Chambers’ Arbitration Institution.

We warmly welcome him and are looking forward to the closer collaboration and joined work.

At our Annual Assembly yesterday, we had a look on this year's activities and looked ahead what next year will have to offer. Our guest of honour, Daniela Stoffel, State Secretary for International Finance, joined us and gave us a first-hand information on the important changes in the Global Tax System particularly with the digitalization of the economy and the global minimum tax. Thank You to Daniela Stoffel for the amazing Keynote Speech! 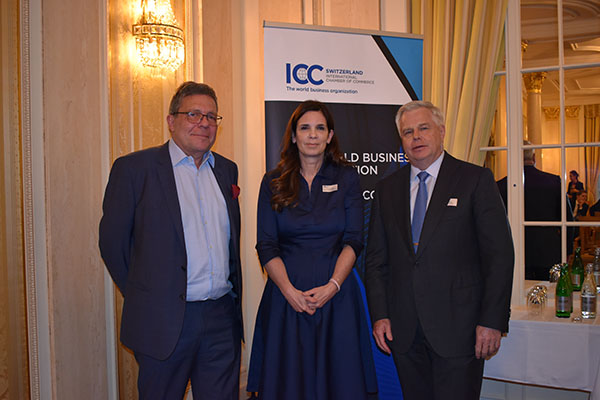 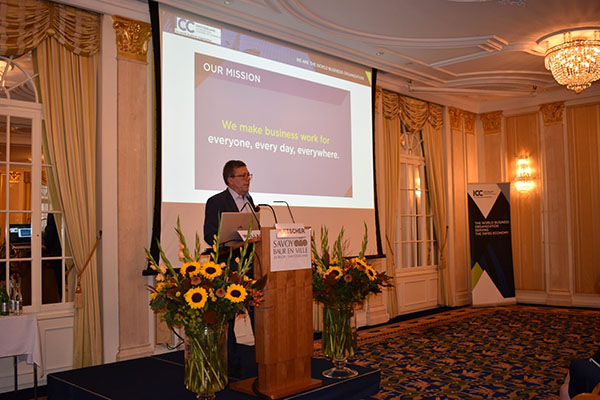 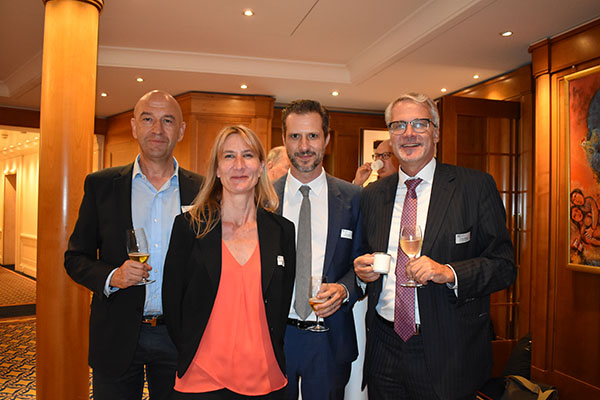 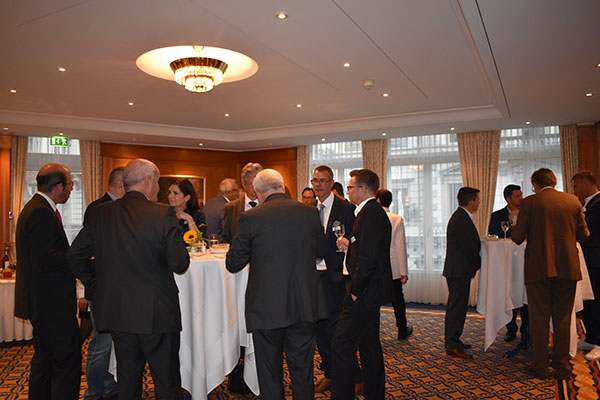 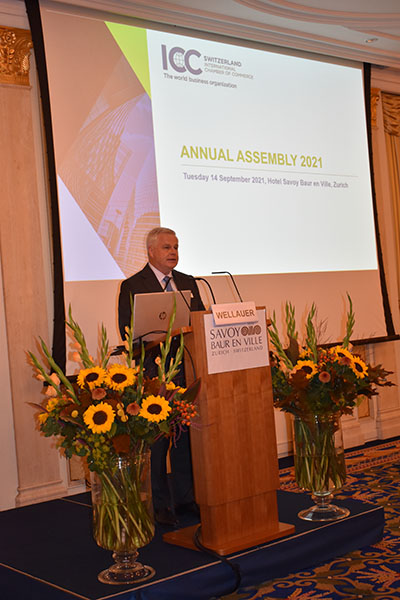 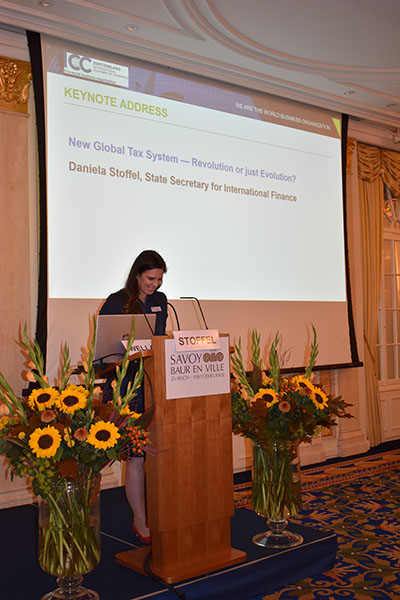 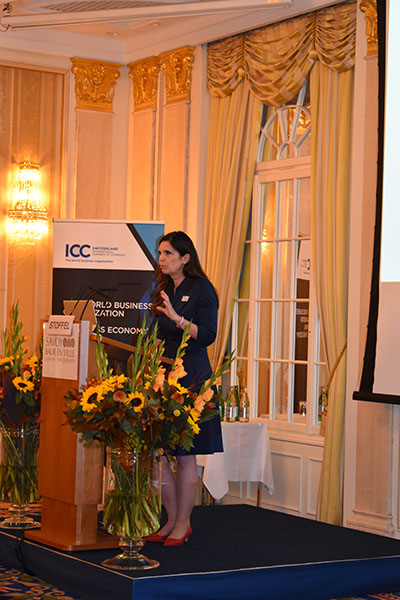 On behalf of our Chairman Thomas Wellauer, we are pleased to invite you to our Annual Assembly 2021 at Hotel Savoy Baur en Ville in Zurich on Tuesday 14 September 2021.

Switzerland faces important changes in the Global Tax System particularly with the digitalization of the economy and the global minimum tax. This will have a substantial impact on companies in Switzerland. The respective negotiations are coordinated by the State Secretariat for International Finance (SIF). Our guest of honour, Daniela Stoffel, State Secretary for International Finance, will give us first-hand information at the Annual Assembly and open the discussion. It will be also an occasion to discuss with the State Secretary the consequences of Covid-19 in the in the field of finance and taxation.

Our Annual Assembly will be an occasion to get an overview on the activities of ICC in general and to look ahead. We look forward to seeing you in September. The event will be organised in accordance with the rules relating to COVID 19. Access is restricted to persons in possession of a COVID certificate. Our assembly is open to representatives of members of ICC Switzerland and delegates in general. Please feel free to forward this invitation to colleagues. Non-members are also welcome to participate. Registration is compulsory.

Register using the registration form and send the completed form to This email address is being protected from spambots. You need JavaScript enabled to view it.

We are delighted to invite you to attend the ICC International Trade & Prosperity Week – RESETTING THE GLOBAL ECONOMY, 18th – 22nd October virtual event.

ICC ITPW 2021 brings together over 1,000 attendees from across the world and is the flagship conference of the year that encompasses all major policy priorities to specifically address “how” companies, organisations and governments are implementing solutions that deliver more inclusive, sustainable, and greener outcomes to build back better.

Supported by over 27 ICC offices worldwide, each day has its own theme:

International audience and speakers bringing insights from across the world

New composition of the ICC International Court of Arbitration

Paris/Zurich, 1 July 2021 - Claudia Salomon has begun her term as President of the ICC International Court of Arbitration – Three Swiss have been elected members of the Court

Ms Salomon, who takes the reins from former ICC Court President Alexis Mourre, was formally elected on 11 June by ICC’s supreme governing body, the World Council. Her election marks a milestone in the ICC Court’s almost 100-year history as the first woman to become President of the world’s preferred arbitral institution.

Ms Salomon is supported in her role by the ICC Court – comprising 195 members from 121 countries and including 17 Vice-Presidents – which begins its 2021-2024 mandate under Ms Salomon’s leadership today. The new ICC Court includes 68 new members and 12 new Vice-Presidents also elected during the World Council meeting of 11 June. Members of the ICC International Court of Arbitration ensures the quality and enforceability of ICC Awards.

Switzerland has a longstanding important position in the field of international arbitration and is traditionally strongly represented in the world’s preferred arbitral institution. Also this year, three recognised experts from the Swiss arbitration community have been elected. Daniel Hochstrasser has been elected new Vice-President of the Court. Diana Akikol has been elected as new member and Laurent Killias as new alternate member. ICC Switzerland is proud that again three outstanding Swiss arbitration practitioners will be on the Court, and sincerely congratulates them. A big thank you is addressed to Teresa Giovannini, outgoing member of the Court, and Anne Véronique Schlaepfer, Vice-President of the Court and Member of the Executive Board of ICC, for all her efforts during her two terms.

ICC Switzerland plans to organize a meeting to establish first contact with the new President of the Court either in Switzerland or on the occasion of a visit of the arbitrators in Paris.

In addition, Daniel Hochstrasser is frequently chosen as a party-appointed arbitrator and chairman of international arbitrations. While many of these proceedings are conducted under the ICC or Swiss Rules, his experience also extends to the rules of all other major institutions and ad hoc arbitrations. He is a lecturer at the Universities of Zurich and St.Gallen, and has published and lectured on arbitration and litigation in Switzerland and abroad. He has already been a member of the Court since 2015.

Dr Diana Akikol is a partner at Walder Wyss based in the Geneva office. She represents clients in commercial arbitrations and regularly sits as an arbitrator, often as president. Her practice has a particular focus on sales, M&A, shareholder agreements, agency, licence and distribution, consultancy, and other services. She also has extensive experience with claims relating to large infrastructure and construction projects. Dr Akikol is member of the ICC Commission on Arbitration and ADR (Paris) and the Swiss ICC Commission of Arbitration and ADR. She furthermore serves on the Board of the Swiss Arbitration Association (ASA), the Arbitration Court of the Swiss Arbitration Centre, and the International Advisory Board of the Vienna International Arbitral Centre (VIAC). Dr Akikol regularly speaks and publishes in her field.

At the Forum we will take a look at the benefits and challenges of international supply chains:

Phone +41 44 421 34 50
This email address is being protected from spambots. You need JavaScript enabled to view it.